Just a quick post: I've added a page called "Cosplay" to the blog/site (the link is next to the Art and Music pages on the top of this page, or if you're on a mobile device, you can open the pages menu by clicking on the "Home" link). I've already uploaded photos of my World of Warcraft orc there, and have also added my Necromancer and "Elderling meets Kerrigan" costumes (although those never got an "official" photoshoot, so there are fewer pictures and not quite as good quality). My next project is going to be building the Tier 10 Death Knight armor (Scourgelord, also from World of Warcraft). Thinking of making a version of Frostmourne for her weapon! 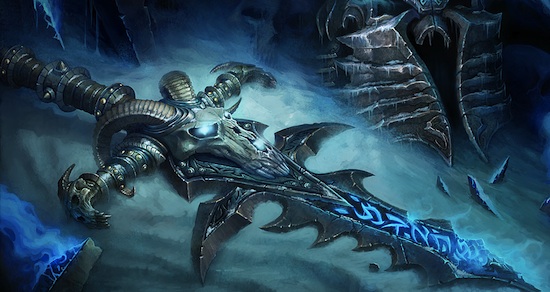 Frostmourne, the soul-stealing sword of the Lich King.

Here's a few photo edits of my orc cosplay. I've made the entire costume and the axe myself, out of 2 mm, 10 mm and 15 mm EVA foam which was painted with acrylic paints. Some details (spikes, and the like) were sculpted out of polymer clay. I also did the makeup and the photo editing. I'm quite pleased with how it turned out, although there are plenty of things I would do differently were I to remake it. It's always the same story. I start a project, get really excited about it and work on it nonstop. Then I lose steam (usually because I run into a problem I can't solve in that instant), forget about it until one day I rediscover it and, miraculously, solve the problem in a heartbeat.

So... that's essentially what happened to this one. Believe it or not, I legit started out with a riff from vanilla World of Warcraft's "Volcanic" theme (plays in the Burning Steppes, Searing Gorge and Blackrock Mountain), and... well, obviously it went somewhere very different! To be honest, it's the bit with the guitars at about the 1:31 mark that I really like in this one. I've been trying my very best to get better sound quality in my compositions, and I think that compared to my earlier work, the newer stuff definitely sounds better and more defined.

It's almost Valentine's Day, and I'm feeling romantic! Yes, in spite of the fact that it's the occasion everyone loves to hate. So let's talk about video game romance.

I'm not ashamed to admit that one of the things I love (uh, pun unintended) about CRPGs are the romances. Let's face it, love's what makes the (real) world go around for most of us, and for a game with any kind of depth to skip that part of humanity would be just weird, because if you throw a bunch of people together for long enough (i.e. a party of adventurers), usually some of them will end up together. Bioware sometimes gets a bad rap because of its "dating simulators", but certainly a well-written romance arc will add immensely to a gaming experience (notice how I said well-written, and not necessarily one with a happy ending). And, as long as the content is optional, everyone wins, right?

When Obsidian announced that there would be no romances in Pillars of Eternity, I wept inside. Like, you put a good-looking chap with a shield into my party, and he doesn't even acknowledge my character as female? Pfft. Screw you, Edér. (Well, at least it's not nearly as frustrating as almost-but-not-quite-romancing Bishop in Neverwinter Nights 2. Now that caused some permanent damage.)

Speaking of Bioware, it was one of their games that first made me discover that romances in video games were a thing, namely, Neverwinter Nights: Hordes of the Underdark. Ah, the suspicious Valen and his powerful neck muscles. How my character strived to prove to him that she was trustworthy! ;)

When it comes choosing favorites, it's difficult to decide, but the first prize would probably have to go to Garrus Vakarian from the Mass Effect games. I really liked him in the first game, and when I discovered that you could romance him in ME2, I was just giddy. Garrus is absolutely badass, funny, and, at times, awkward.


Yes, Garrus is an alien. More precisely, a Turian. Turians look like a cross between an eagle and a cat. Luckily, he doesn't sound like one.

Now that we've established that I'm a hopeless and unapologetic romantic, it should come as no surprise that what I do best is compose sappy-yet-sad pieces, where I get to wallow in the tragedy of love.


Ah, love. Don't you just love the thumbnail? Especially the red-headed Triss with Geralt. So cute.

This particular melody kept playing in my head until I just had to "put it onto file", and I knew from the start that it would have to feature at least one instrument from my favorite family of instruments, the oboe family. There's just something special about their warm and rich, yet clear sound. So, there's two (the oboe, and the english horn, or cor anglais, if you're feeling fancy).

In my opinion, the end result resembles a romance theme from a fantasy RPG (in fact, there was a time when I was a bit worried I might have "borrowed" something from Jeremy Soule), so I named it after the fan fiction I've been writing about Neverwinter Nights 2. No vocals this time. I love this as it is - and I have to admit that overall I do prefer to listen to instrumentals myself. Duh, it's why I love game music in the first place.

The video shows this piece being played back in both the notation software I use to create my midi files, and the digital audio workstation (DAW) I then use to flesh them out with sampled sounds. Note that I use the notation software just to create midis, so some of it may be unorthodox (such as the numerous pppps, which you don't really see in notation that much). Also, forgive me if the footage recorded in Ableton Live isn't entirely in sync, I couldn't get OBS to record the sound (apparently has to do with the ASIO driver) so I had to guess from the visuals, and combined with the crossfading, it was a bit tricky to get right. 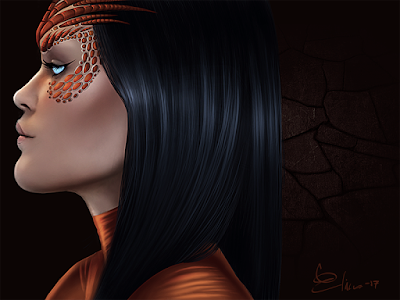